When Dr. Jason Streeter purchased his practice he quickly determined that the Dentrix software he inherited wasn’t what he needed to run a modern practice. That’s when he switched to Curve Hero.

In 2017, Dr. Jason Streeter bought an existing practice that used Dentrix software. He found the navigation was unintuitive and inefficient compared to modern software. And it ran very slowly.

Dr. Streeter decided that Dentrix might be so sluggish due to his outdated hardware so he spent thousands of dollars to upgrade his office’s server and workstations. Unfortunately, that move yielded virtually no improvement.

Besides the graphical appearance, the outdated interface was frustrating to use. When he tried to analyze his new practice’s data by running basic reports, such as active or overdue patients, the results generated slowly and the output was a physical printout. There were no graphs, charts, or modern practice analytics. The schedule, patient chart, patient documents, and other modules all loaded as separate applications that were bolted together over the years.

Frustrated, Dr. Streeter finally realized that a server-based system like Dentrix would never deliver what he needed to run a modern practice. That’s when he decided to look at cloud technology.

Dr. Streeter reviewed all cloud options and concluded that the best software for his needs would be Curve Hero.

When it came time to merge Smile Solutions with another practice, Curve helped make the process easier through: 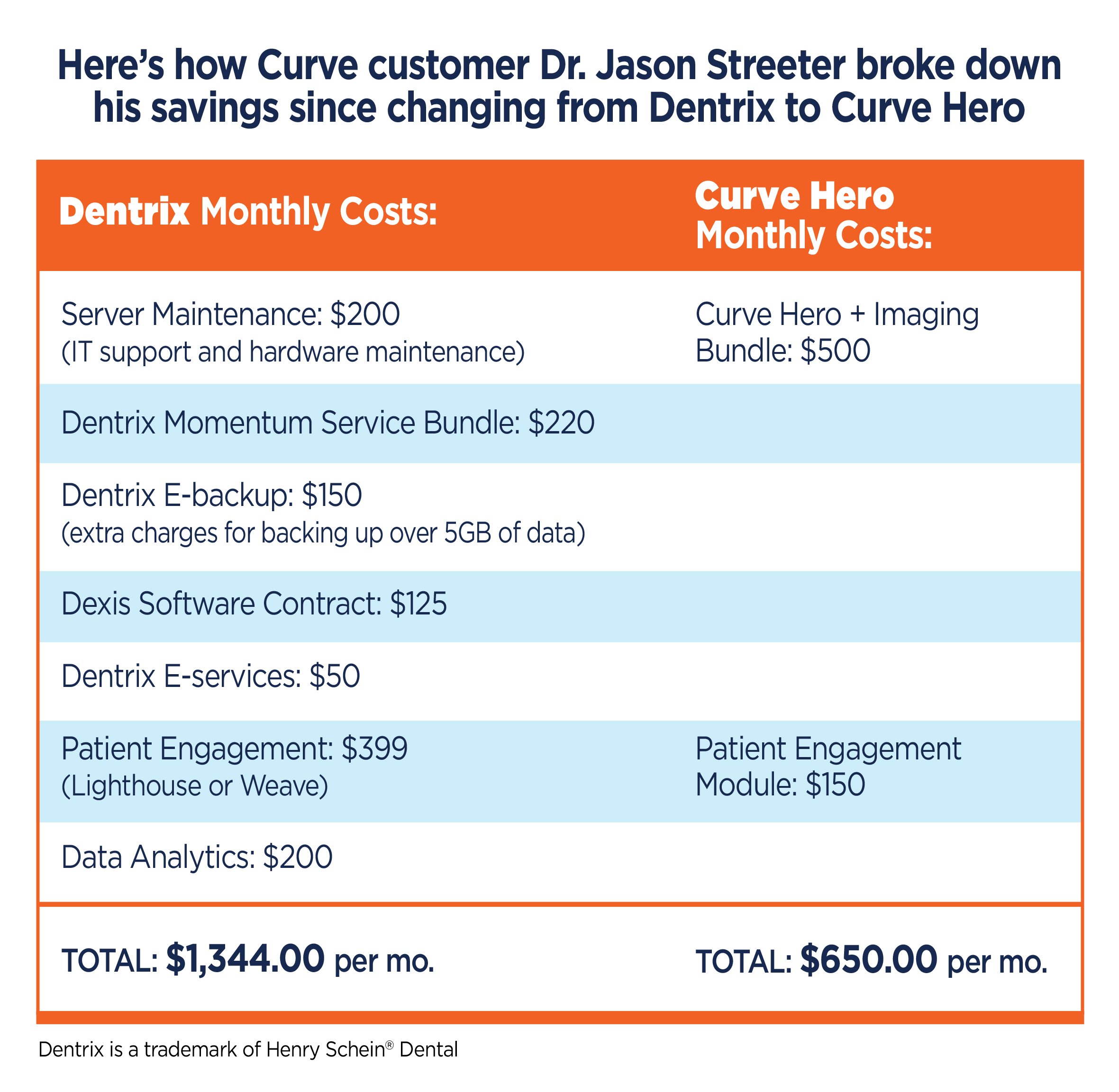 A modern platform built from the ground up to be fast and efficient, Curve Hero has a beautiful interface, data analytics, patient communication features, and much more.

Dr. Streeter quickly learned that cloud-based software inherently offers significant advantages over server-based software -- starting with no longer needing a server. Cloud software data is stored in a dedicated facility with security that cannot be matched in a dental office. The data is automatically backed up and logged and no protected health information is stored on local computers, greatly simplifying HIPAA compliance.

Curve Hero automatically updates and releases new features, keeping everything up to date without requiring new hardware of interruption of normal operations. When Curve introduced GRO™, its patient engagement module, Dr. Streeter benefitted from the expanded capability without bridging to a third-party software. The combination of software, service, and support Curve delivered made running his practice much easier and prepared to thrive in the future.

Four years ago, having just bought the practice, changing office management software was not something I wanted to deal with, but in hindsight, I’m so glad I did. Moving to Curve Hero has made all of our daily office tasks faster and more efficient.

What I like about Curve is they have built their software from the ground up for the cloud. Other companies seem to be developing cloud-based softwares on the same outdated foundations as their server-based offerings.

Dr. Streeter was especially grateful for Curve Hero when COVID-19 forced his practice to shut down for six weeks. During the lockdown, his team had secure access to their complete patient database and radiographs, which made it easy to manage emergencies and provide teledentistry from home. With all patient information stored on secure servers, Curve Hero eliminated concerns regarding data vulnerability he had with the server-based software that required remote access programs such as Teamviewer or Anydesk. Dr. Streeter is now comfortable offering his team flexibility to work from home for tasks such as completing clinical notes or filing insurance claims.

We use cloud services for so many other useful applications in our lives. I’m glad to see the benefits of this technology coming to our dental practices.

To see how Curve SuperHero can benefit your practice, call 888-910-4376 or visit www.curvedental.com